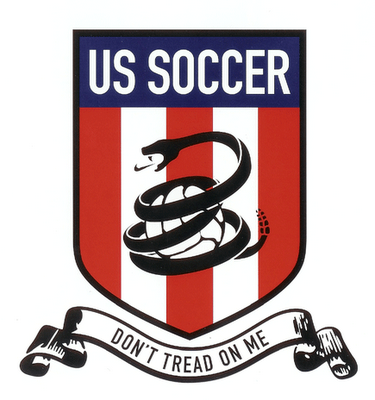 US Soccer - Don't Tread On Me

Today was a good day for US Soccer. I know it’s not a win, but a draw is also something to be proud of. I have to admit that I am not an avid follower of the sport. When I was young my brother and I played for a league in Dallas. Later as a teenager I also played pickup games that took place behind my high school. Most of the players were from Mexico or Central and South America. Their English was not the greatest and my Spanish was among the worst. That did not matter on the field as that was some of the most intense Soccer I ever played. Other than those unofficial games my sporting life has been occupied by watching American Football on television, notably my favorite team of all time The Dallas Cowboys. Which brings me to where I am today. I have made it no secret I love America. So naturally there was no question that I would be watching our USA Soccer Team take on The Three Lions, The Saint Georges Cross, and Our Closest Friends across the pond, England. A draw for England against The United States might as well have been a loss. For us it was as close to a win as we could have had. I am proud of our team and look forward to seeing us advance from here to the future. Well done USA!